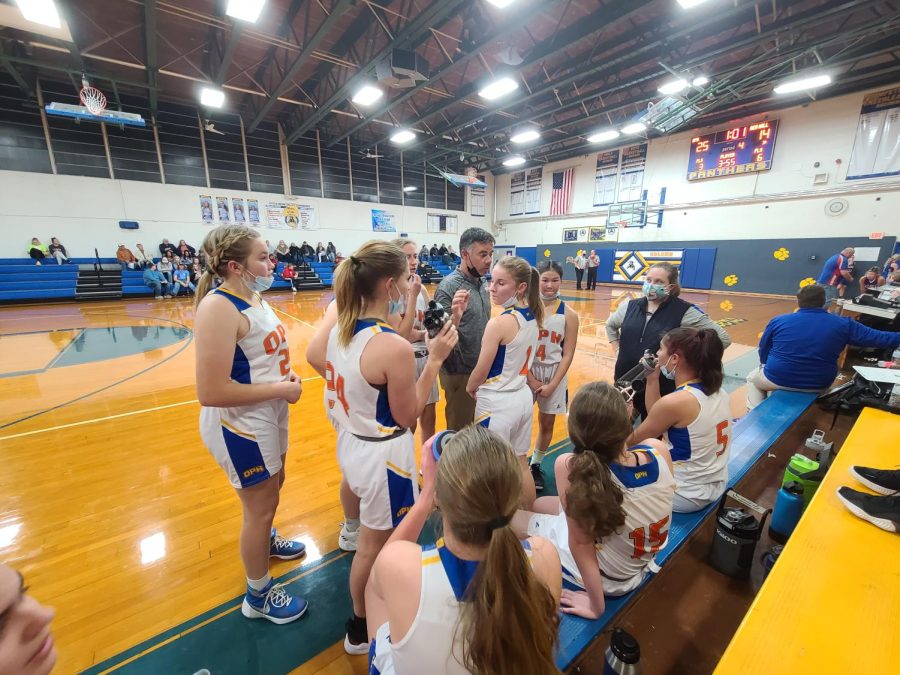 The Oblong-Palestine-Hutsonville Girls’ Basketball team went head to head with the Red Hill Salukis on Monday night in Oblong. The Junior Varsity kicked the night off with their first win this season. The game started out slow with a blank scoreboard until the three-minute mark. OPH hit the board running after that. With seven seconds left in the first quarter, OPH had a turnover on the offensive side. Red Hill missed a shot on their fast break, and the quarter ended with a killer rebound by Addison McNair.

Cydney Pethtel’s hands were on fire as the 6’3″ sophomore had two back-to-back field goals within 15 seconds. Daylen Beckes nailed a three-pointer in the second quarter with 39 seconds left on the clock, bringing the score to 15-5 at halftime.

The OPH defense let some points slide during the third quarter. Red Hill was able to score just as many points in the third quarter as they had the entire first half. Starting the fourth quarter out at a 25-10 lead, OPH kept the game pretty steady for the remainder the time on the clock. Marissa Neeley of Oblong was fouled with six seconds left in the game and netted both of her free throws to bring the game to a 29-16 victory for the OPH Junior Varsity.

The Varsity team took to the court a few minutes later and did not disappoint. Katie Draper led the team with 33 points, falling just short of 1,000 high school career points. She is currently at 997, so be sure to show up to Dietrich tonight to see the boss get it done!