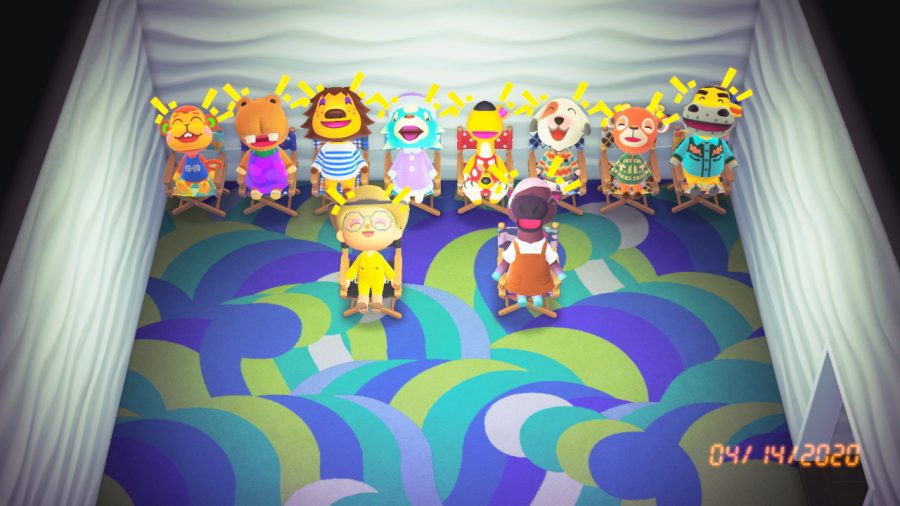 My villagers and I having good laugh

On March 20th the world experienced something they hadn’t felt since the Summer of 2016 when Pokémon Go came out. A brand new Animal Crossing came out on the Nintendo Switch. The last main series game New Leaf released in 2012 giving New Horizons (2020) a lot of hype. Of Course spin-off games like Happy Home Designer (2015) and Pocket Camp (2017) had been released, but they were not quite the same. Now I am going to take you on a journey of my Animal Crossing: New Horizons game experience.

March 20th started out pretty normal for me. It had been a full week of quarantine and I really had not been doing anything. I knew that the game came out, but I was hesitant to buy it. I had never played any others besides Amibo Party (which was a spin-off so I knew nothing about the franchise) with my cousin. With the help of some friends and realizing I had nothing better to do, I bought the game.

The thing I quickly learned about the game was that almost everything is custom to you. One of the first things you do is pick out you custom generated map layout. Then when you arrive you are given a random fruit and two random villagers. There are five types of fruit and 402 different villagers, so your starting two are pretty special to you. Later I learned that almost everything is random to your player. Everyone has the same items in their shops, but the color pallets are randomized. The airport has four different color options, and the flowers that grow on your Island are custom. As the day went on and I started to realize how special my island was to me, I had a hard time wondering how I would progress if I didn’t know anything.

A few days went on and I was doing the same thing over and over again. Dig up fossils, catch bugs and fish, cut wood, and sell sea shells. Eventually, I caught enough bugs that the museum would open. One of my favorite aspects of the game is that you get to decide where everything goes. So I picked out my plot, it was a bad plot, and waited a day for the museum to open.

After the museum opened I felt lost on what to do. I had sold bought enough items from the wandering Nook twins that they decided to build a shop. The only problem was they needed 60 wood and 30 iron. I had the wood as soon as they asked, but it felt like weeks before I would have enough iron. A few more days of me hitting the rocks on my island went by, but I still wasn’t close to having enough iron.

That’s when the game blew up on TikTok. Long time players of the game began posting helpful tips for the game and they were getting thousands of views. I learned that you could spend you miles (“points” earned from doing various tasks) on a Nook Miles Ticket. This ticket would take you to another random deserted island where you could gather resources for your island. After just one trip, I had the iron I needed to build the shop and thus “Nook’s Cranny” was brought to life. Over the next week, and hundreds of TikTok’s later, I had opened a clothing shop and a town hall.

I’m still learning new things everyday, but over the past month I have really learned a lot about the game. This game has really helped me distance (joke intended) myself from the things going on in the world right now. I give the game a 10/1o. I think anyone who has played games like Minecraft or Stardew Valley would find a lot of comfort in this life simulation game, and if you are ever lost just look up some tips and tricks on TikTok to help you progress.