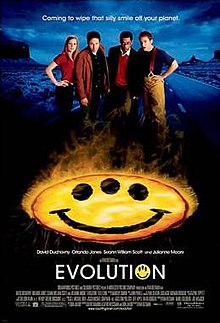 Evolution was a 2001 Sci-Fi comedy that is very dear to my heart. It stars David Duchovny, Orlando Jones, Seann William Scott, and Ted Lavine. It was released by Dream Works in the United States,but then was released by Columbia Pictures internationally.

The movie is an absolute roller coaster, The movie starts in the desert of Nevada with Seann William Scott’s character practicing for a firefighter’s exam he has in the morning. He is paying so much attention to the fire he had set a few seconds ago that he doesn’t see a meteor coming right for him. It hits the ground and goes into an underground cave system, and two college professors named David Duchovny, and Orlando Jones go to the crash site to investigate. They chip off a piece of the rock, and they see that the rock “bleeds.” When they take the rock back to their college lab, they see that single celled organisms were a part of the rock and that they were evolving at rapid speeds. Then the military takes over the site of the meteor, and they won’t let the two scientists in the site because they see them as less than the military. This is only the beginning of the movie, and I do suggest that you go and rent or buy the movie. Heck, I’d even say watch it illegally if you can.

This is one of my favorite movies of all time. The movie itself is amazing, and I can’t stress enough for you to go and watch it.